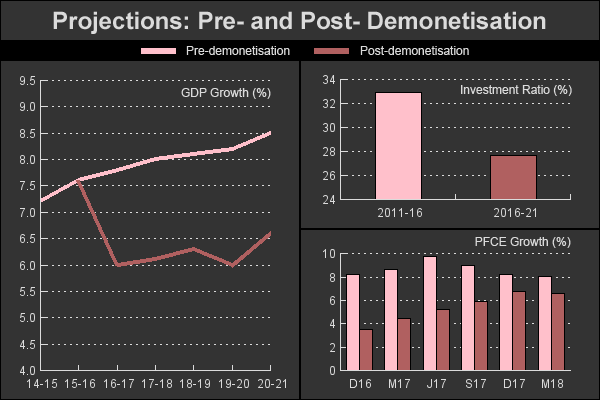 Demonetisation to cause sustained downturn

Compared to our earlier forecast, this year’s growth estimate has been scaled down 164 basis points following demonetisation. However, we expect the long-term damage to be greater than the damage caused to growth during 2016-17. On an average, growth during the coming five years upto 2020-21 has been scaled down by 187 basis points compared to our earlier forecast for the same period.

Before the demonetisation shock, the Indian economy was expected to gradually accelerate its real GDP growth rate from 7.5 per cent to over 8 per cent per annum.

We now expect this growth trajectory to shift down to about 6 per cent per annum for the next five years. The economy is unlikely to achieve a growth of 7 per cent any time during the coming five years.

The immediate impact of demonetisation was a sharp reduction in private final consumption expenditure, a corresponding fall in retail prices of perishable commodities, a substantive dislocation of labour and corresponding losses in wages and a break-down of supply chains in many parts.

Private final consumption expenditure declined because the available cash on hand to transact retail purchases reduced sharply following the removal of 86 per cent of the currency in circulation. The cash to GDP ratio is high at 12 per cent and reportedly, over 90 per cent of the transactions in India are cash based. As a result, the sudden and sharp reduction in currency had an immediate and significant impact on consumption expenditure.

The fall in retail inflation to 3.6 per cent in November and the fall in sales reported by several fast moving consumer goods companies are early indications of the fall in consumption expenditure.

Labour has been dislocated from productive work as they were forced to line up in front of banks to convert their old currency notes into new ones. Given that banks did not have sufficient new currency notes, this led to substantial dislocation of labour and a corresponding loss of wages. The fall in consumer demand combined with fall in availability of cash also led to a fall in the demand for labour. This sets in a vicious cycle of low demand for labour and low consumption expenditure.

None of these conditions are expected to be fulfilled in a hurry. Estimates of restoration of full liquidity range from mid-January to September 2017. Two thousand rupee currency notes do not provide liquidity like the decommissioned currencies provided and so we believe that liquidity is likely to be restored only towards the early second half of 2017. It would take a little longer to gain confidence that the liquidity is for real. The government or RBI have not taken steps to scotch rumours of demonetisation of the two thousand rupee currency notes. As a result, the effective liquidity in the markets is much lower than is measured by the issuance of new currency notes. The two thousand rupee note is less liquid than it would be without the rumours regarding its lifespan.

Further, a flight from currency in hand to other asset forms because of a fear of potential loss of liquidity through further demonetisation and a fear of raids or enquiries, could structurally reduce the propensity to spend on consumption goods.

This trend shift in consumption expenditure will delay a revival in investments. We expect capital formation to shrink by nearly two per cent in 2016-17 as against an earlier expectation of a 2.3 per cent increase in the same. We had expected investments to pick up pace each year thereafter to reach 10 per cent growth only in 2020-21. Gross fixed capital formation was expected to remain around 29 per cent and reach 30 per cent of GDP only in 2020-21.

Now, we believe that the investments-to-GDP ratio would be only around 27-28 per cent.

Assuming that private final consumption expenditure does rise at 6-7 per cent per annum, we project that capacity utilisation will rise sufficiently to drive at least some investments. We do not expect any big changes in government or private spending on infrastructure. The push for infrastructure development has been a constant since the mid-1990s. We expect this to continue similarly without any particular acceleration from the trend.

We expect government spending to offset part of the impact of demonetisation through increased spending. But, government has a smaller role and can contain the damage only partially.

RBI may announce another round of bond purchases

By January 2022, pandemic will be behind us: TVS chief

From farms to the kitchen-sink