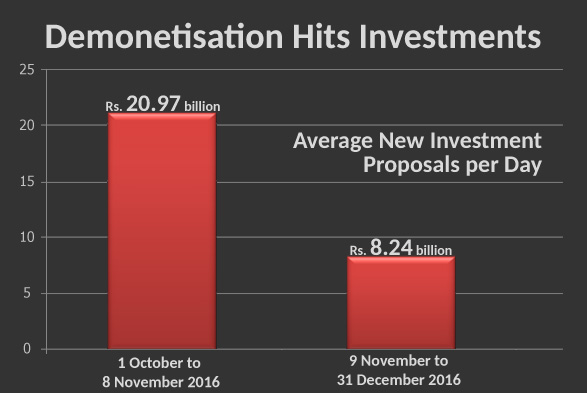 Lowest numbers in over a decade

New investment proposals worth Rs.1.25 trillion were observed during the quarter ended December 2016. This is low compared to the average Rs.2.36 trillion worth of new investments seen per quarter in the preceding nine quarters of the Modi government.

New investments worth Rs.20.97 billion were announced, on an average, per day during the 39 pre-demonetisation days from October 1 through November 8. This average dropped sharply by 61 per cent to Rs.8.24 billion during the 53 post-demonetisation period. The number of projects announced per day dropped from 6 to 3 by a similar comparison.

New investments, therefore, had slowed during recent quarters and, demonetisation has further slowed down their pace.

On an average 7-8 projects are announced per day. The post-demonetisation fall in this average to just 3 projects per day reflects a new level of anxiety on the investments front.

Evidently, uncertainties caused by demonetisation have played a role in the fall in the flow of investments. The investments climate has been weak for some time. This is now expected to remain weak for some more time.

Economic Survey may have single volume this year